Menu
Log in
Register
Install the app
You are using an out of date browser. It may not display this or other websites correctly.
You should upgrade or use an alternative browser.

Status
Not open for further replies.

Staff member
Why Britney I hear your cry, well because Oops baby I've done it again. Staff member
Got back home with the latest purchase, current plan is just to get it registered & then sold, but we'll see if it grows on me & then decide which one goes. However I'm not allowed to do anything with it for now, we have space for 4 cars across the front of the house, currently we have Melvin, the wife's Rav4, my son's other half's X1 which they are supposed to be selling but they are on holiday and then the truck with Britney on it. So it has to stay on the truck till the X1 gets sold, the truck is also supposed to be being sold as well, which will then give me s[ace to work.

I have also promised to put some decking & artificial grass in the back garden which has to be completed before I can make a proper start. Only issue with that is I started when I got back only to find I had a Bumblebee colony right where the decking is supposed to go, so it might be delayed.

Anyway enough of the ramblings, I used Melvin's waterproof sheet inside Britney yesterday so even though I'm banned on touching her I had an excuse that I had to recover the tarpaulin. It has revealed though that both subframes will have to come back off, they don't even look like they've been sanded down, looks like just been painted up. Couldn't resist putting a battery on & checking a few things out, headlights work, indicators work, brake lights don't, but possibly because the wires have been cut too short to reach the pedal

it's missing a lot of little brackets, like the braided brake lines are in, but not fastened to anything, the wires appear to go the wrong sides of the panels, so plenty to do.

But the best bit was

Staff member
Nothing has happened with Britney since arriving, the back garden has been remodelled, 60 flagstones picked up & moved around the front of the house for collection, then 300 blobs of mortar were taken to the dump, 50 meters of 3x2 tanalised timber made into ladder frames, then 80 meters of decking, 2 tonne of sharp sand & eventually 4m x 5m artificial grass up down. Which of course because of all the newness made other things look shabby so out came the paint!!!!!

However today I'd had enough & needed a distraction, the X1 had gone to it's new owners on Sunday, my son needed the truck to fetch a car for a friend which meant Britney had to come off the back of it. She was driven off & put on the drive only 50 yards, (do need to check if there is any coolant in her), as stated the subframes need to come off, so I started today, I can already see I need to go through the whole car to see what hasn't been done correctly, I'm amazed new track rod ends have been put on, but the ball joints are rusted solid, I can see I'm going to have to cut them off.

The suspension arms are going to have to be checked over as they are very rusty, the car had only done 54K but I suspect it was by the sea, 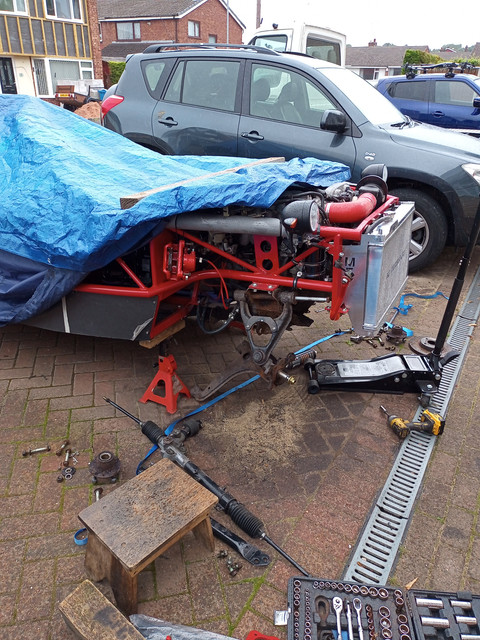 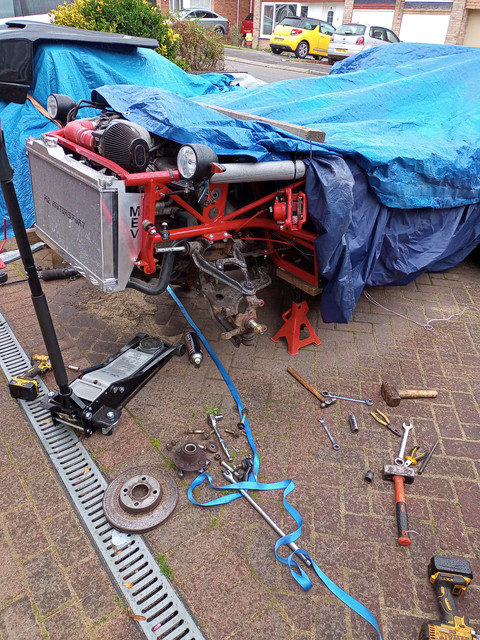 Although I did find a life lesson, when the upper arm bolt goes back on make sure it goes from the back to the front, otherwise the next time it has to come out the whole subframe will also have to come out as well. Not sure why the design wasn't changed so these bolts could be fitted either way. 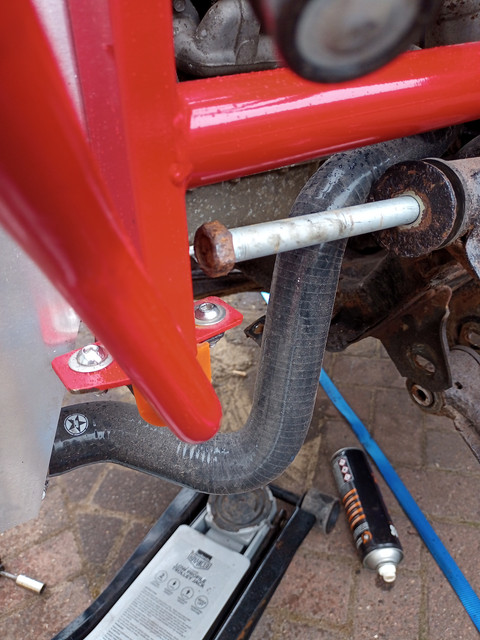 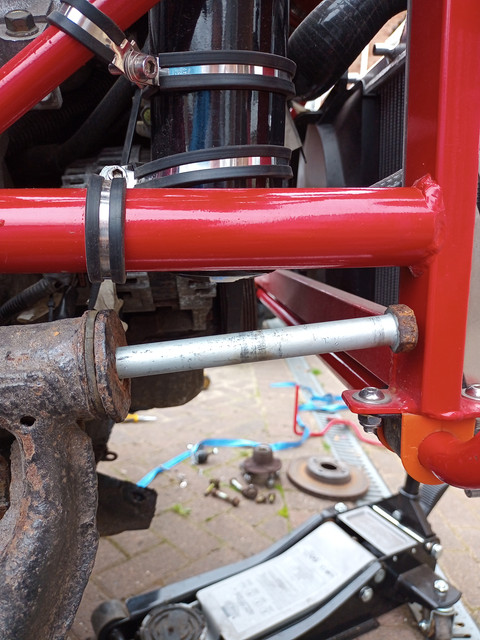 Next job is to support the engine on a strap so that it can be unbolted from the subframe, so the subframe can be lowered to finish dismantling, need to get both upper & lower balljoints on order, just think it looks much better on the test if they can see all consumable parts have been replaced with new.

Staff member
Between the rain I managed to put a a piece of wood across the chassis rails, then a large ratchet strap under the engine to remove the main subframe from Britney. I can now fully strip the hubs off the arms, as above I suspect the use of an angry grinder will be involved.

Not quite sure I really understand what was going on, the top balljoints covers are damaged, so had the kit been going for an MOT it would have failed, unless they were dry building it to then strip & replace, no idea.

I'm leaning towards doing it in 2 stages, pushing the bushes out, then getting this blasted & coated, rebuilding & then doing the rear, rather than like I did last time & doing both together. 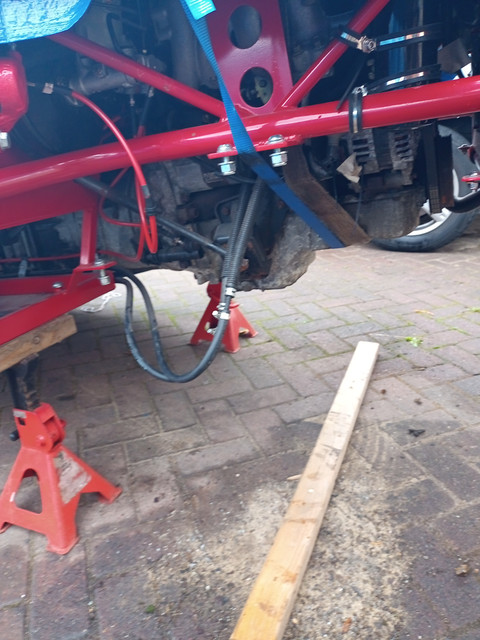 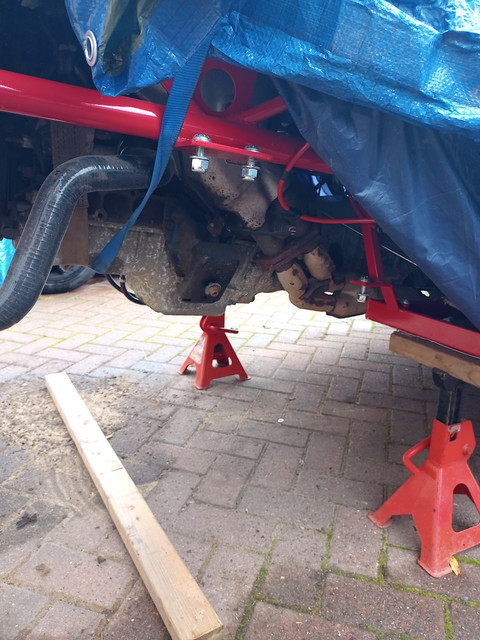 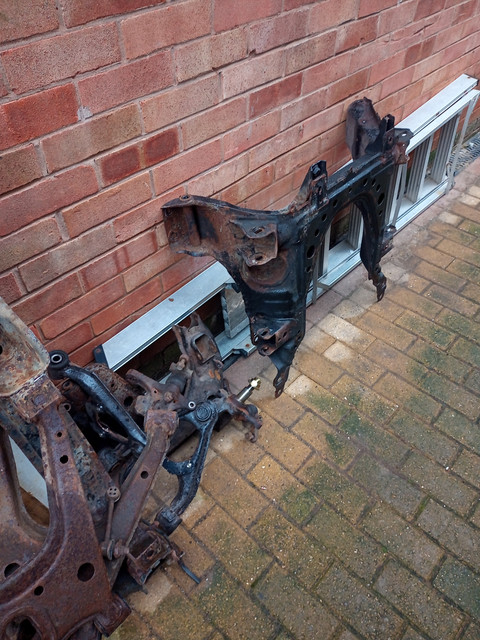 Staff member
So the idea was to get the front subframe powder coated & then rebuilt before tackling the rear, however as usual you start to do something & then by the time you've realised it it's too late to stop & the whole of the rear was stripped.

I couldn't get the driveshafts out of the hubs so went down to my mates garage to use the hydraulic press to get all the bushes out so whilst there I tried to push out the driveshafts!! Yep you guessed it I need a new hub now, I managed to snap off the calliper mounting bracket, it can be welded, but do you want to weld a brake part? 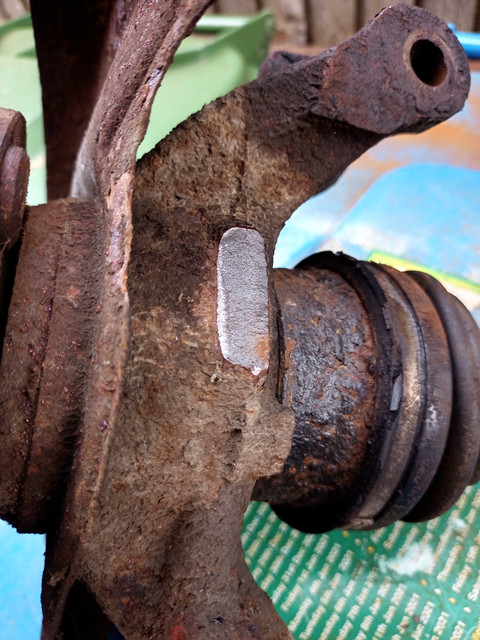 So now on the look out for some new 2nd hand hubs, annoyingly I've also been offered another MX5 with a 1.8L, 6 speed box & LSD for good money but I've nowhere to strip it.

Staff member
Fetched the suspension from the powder coaters yesterday & just had to fit a piece, the rebuild now begins 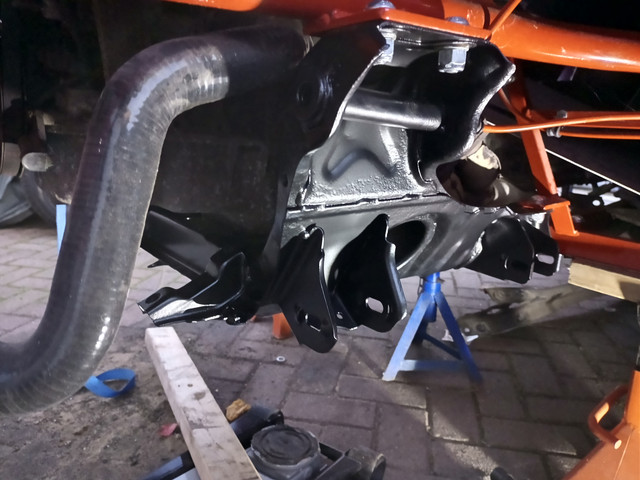 Managed to get some spare hubs but getting the driveshafts out of those is also proving difficult.

Staff member
OMG what a day, I don't remember the polybushes being as awkward last year, had a nightmare with 2 long ones for the bottom of the front lower arm, took ages, seem to remember last year just putting them in hot water for 5 minutes did the trick. Might be my imagination but these seem far harder than last year, logically the colour shouldn't make a difference.

But I managed to get one side completely build the other side I damaged a brand new top balljoint so have had to order another one, steering rack remounted, then got the rear subframe up & into place, we're supposed to be having rain all day tomorrow but we'll see. Only got the lower & upper arms to fit as can't do hubs until I go into mates garage to push out the driveshafts. 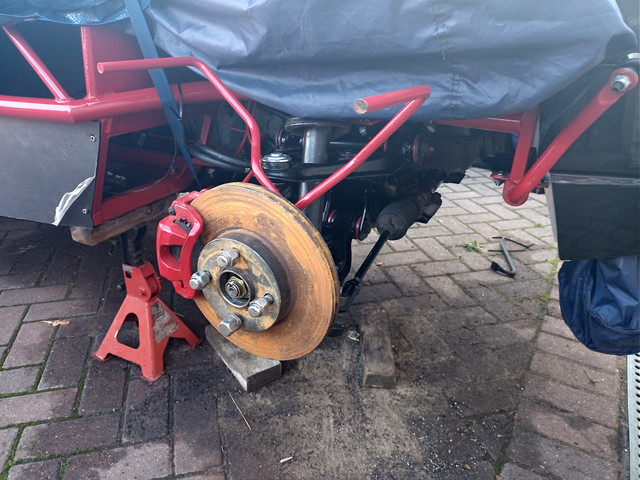 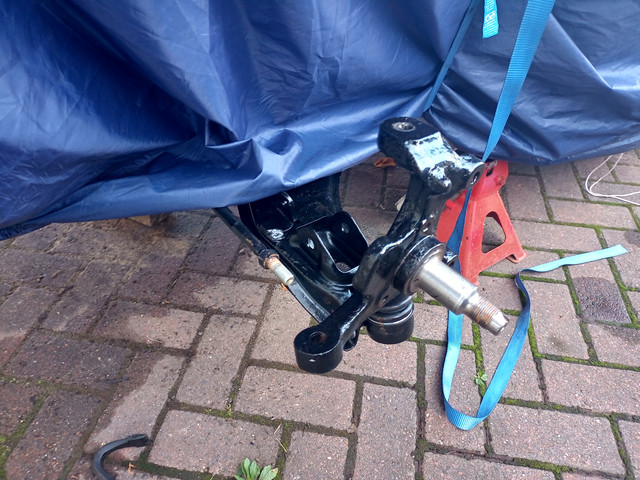 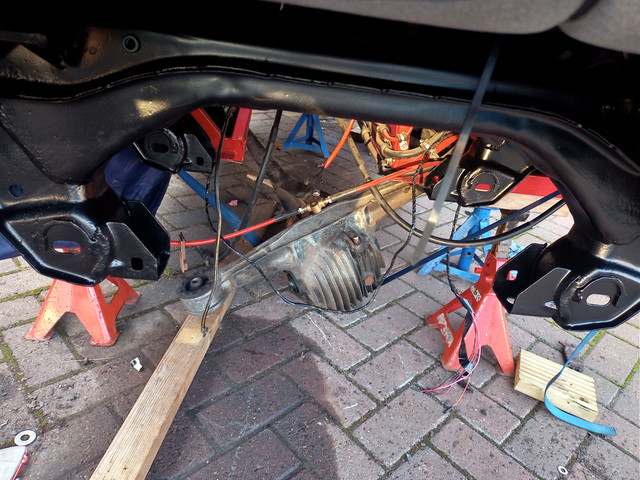 But progress is progress, also bought myself a Bini Cooper S for the winter, which surprise surprise has an oil leak so need to have a look at that as well.

Status
Not open for further replies.