Back from the powder coaters

So here was how Mr Bumble looked on the last day of the Wales 2017 trip, fully loaded up with all my camping gear

Unfortunately then a little later on we were on a single track road with a van coming the other way, we'd just past a gateway 50 yards so I decided we should reverse back, unfortunately I got it wrong & dropped a wheel into a ditch, which then picked up the front ali plate. We managed to do a temporary fix with tie wraps to keep going but when I got home I have this to contend with.

Only other problem was when the front was damaged I lost the indicators, the nearside would flash frantically & the offside also flashed the nearside

So Danny has sent me my new coilover shock absorbers, not going to get onto them until January but have a thought, he's sent a template for the mounting which mounts them like

But the question I have should they be that way, would it not be better to mount them so they oppose each other such as

Well not exactly I would put some space between to allow some movement.
Top

I nearly fell off my chair!!

Very slight update although nothing exciting, went out to Bumble Tuesday morning I think it was, but he wouldn't start, would fire but not keep running, so had to take the Rav to work most to the disgruntlement of the son, I'd said I would leave it him for the day whilst he sorts a car out. So went out today & he fired & ran straightaway, didn't do anything so no idea what it was, did it half dozen times & all was well.

But I got 3 little jobs done whilst I was out there, on the way to Stoneleigh I noticed that the nearside arch appeared to be moving around more than it should when I got there eon inspection the steel had cracked, don't think I've had one yet that hasn't. So out with the welder & zip zap twang.

Another thing I also noticed on the way down was that the oil temperature gauge had stopped working, pulled off the top of the dash to reveal that somebody had stolen the positive feed to it, I honestly don't remember doing it but mist have

The the final job was the fuel gauge LED's they were like landing lights, so bright in the day they almost made your eyes hurt, in the dark they were almost blinding, I found an old variable resistor in the workshop, no idea what it's off so I wired that in, turned up the resistance & now they are nice & dim.

Went to work in Bumble one day last week & it started raining as soon as I got into the office, luckily it stopped about 30 minutes before I was due to go home, went to start him & he wasn't interested, wouldn't turn over & lights would go out. Pretty new battery so doubted it was that, tried to bump him down the very short hill out of the car park but still wan't having any. So called the recovery company to come fetch me & whilst the woman on the phone was making arrangements I was playing around with the negative lead from battery to engine to chassis. Put some pressure onto it & away he went, so cancelled the recovery & drove home, clearly a bad earth, So today made some new leads up & all seems good.

Also made a towbar for him so I can take a small trailer to Wales rather than trying to cram everything into the passenger seat, but that meant starting with a new exhaust, as you can see the bend is not going to do it

So had to get a bit creative with the angle grinder & welder, not too pretty but at least now there are no holes which will please the MOT tester

Then onto the tow bracket

The exhaust clamps are so it can be taken back off, but I'm not sure now that I will, I may just remove the towball so I don't smash my shins. I may need to devise a different method as it will need to be removable so I can get to exhaust & subframe. Annoyingly the towball electric alloy lid snapped the first time I tried to plug anything into it.

Couple of pictures of something else I did last week, swapped out the 4 spots for a lighting bar, Christmas present from the wife, although i'm not sure I ever got the money for it.

Then lastly I had some resistors in as I have LED bulbs, but they appear to be getting very hot, so I've ordered a LED flasher unit.

Wow 11 months since I posted anything about Bumble, problem really is there's nothing to post, the towbar is a huge success taking all the stuff over to Wales was a breeze, gives you so much more space in the cockpit you're not having to constantly keep pushing it back into place. Once I got back from Wales he was SORN & over several weeks/months I did the coilover conversion, it's a bit of a hassle to do & it makes a lot of grinding mess but now having driven it it's well worth the effort, the whole thing is so much quieter.

Start by getting some 50x50 angle & following Danny's incorrect profile, only incorrect as you have to remove more meat from the low side

Then using a load of washers to keep things straight

Then weld up the gap & clean up all the welds

Test fit on the bench

Then starts the messy bit taking the mounts off the frame

Then bolt into place

Bolt up the coilovers

His old cover had had it, it was leaking so treated him to a new cover on the old frame

So this year brings Stoneleigh was due to go Saturday till Monday but through family commitments, had to fetch my 94 year old father along with my 90 year old uncle from the airport at 3:30am Sunday morning, couldn't expect uncle to drive after being up 20+ hours. Fetched them went back to bed, then got up around 8 & drove to Stoneleigh, all I had done Saturday as preparation was check, oil, water & tyre pressures. Again due to other family problems wife was very sick I had to come back Sunday, but had a great day, unfortunately the company was far better than the show, the kitcar industry is dying on it's feet, it's a shame, but there is no new blood coming into the hobby.

Only issue I experienced is that the throttle was quite stiff & smooth acceleration was difficult, looking at the cable today the outer has been worn away by rubbing in a couple of places which has allowed water in & caused the inner to rust, I've managed to free it up with WD40 for now but it needs a new cable & then maybe some protection on.

Drive to & from Stoneleigh was no big issue but the throttle was a real pain, looked on Rimmer Bros only to find a new cable was £56+vat, so went looking for another solution, Fleecebay revealed a local guy breaking MG's so a trip out on Tuesday on the bike secured a 2nd hand one for £8. Quite a funny experience, turned up on the bike, rang the bell, young lad about 10 looked out of the window & said wait, 2 minutes later a lady wrapped in a towelling robe answered the door, he'd got her out of the shower, I had arrived at the right time, but husband had failed to tell her I was coming

Didn't get time to fit Tuesday night, so when the MOT tester picked him up on Wednesday morning I had to warn him, quite funny really it was pissing it down when he drove it to the garage, it pissed it down all day whilst it was stood outside & it really went for it on his drive back, he was soaked but still had a big grin on his face when he got back & I could tell Bumble had been given a decent trash on the way back

Bearing nipped up today all good, I have to start driving him otherwise seems pointless owning him
Top

So a 7 hour round trip resulted in a new subframe for Bumble, it's been blasted, zinc dipped & then powder coated, just need time now to swap it over 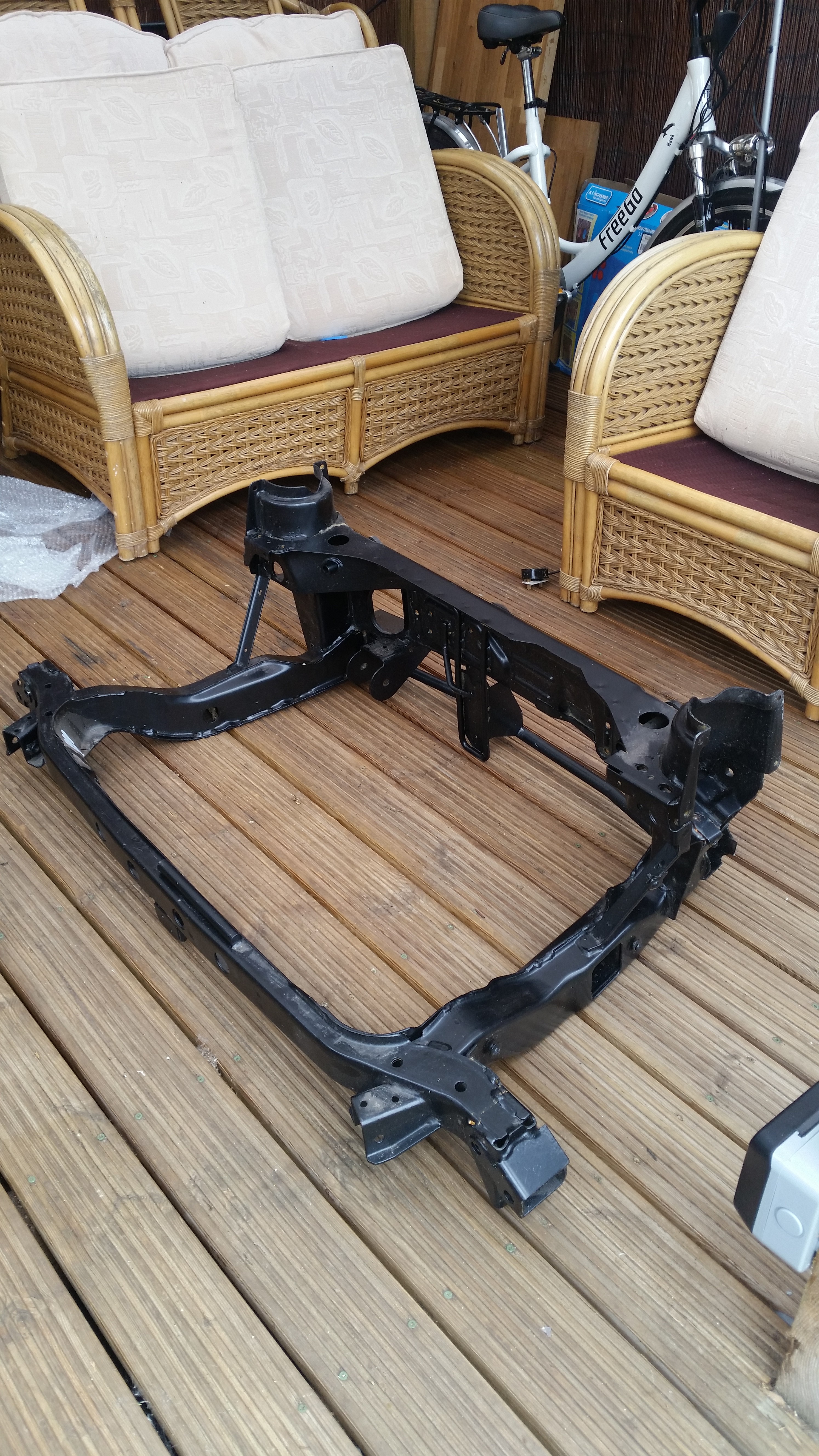 This was one of the reasons it took so long, 3/4 hour to travel less than a mile on the A38, water main has burst, then we got to within 1 mile of the guys house only to find the Police has cordonned the whole area off, so had to do another 7 mile detour.
Top

Been buying again, this time resulted in 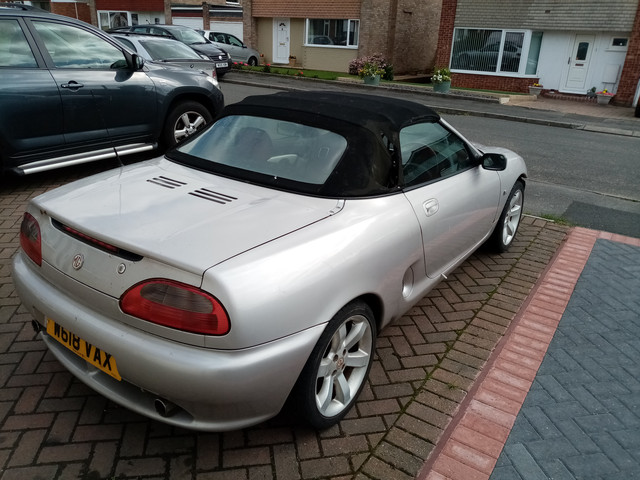 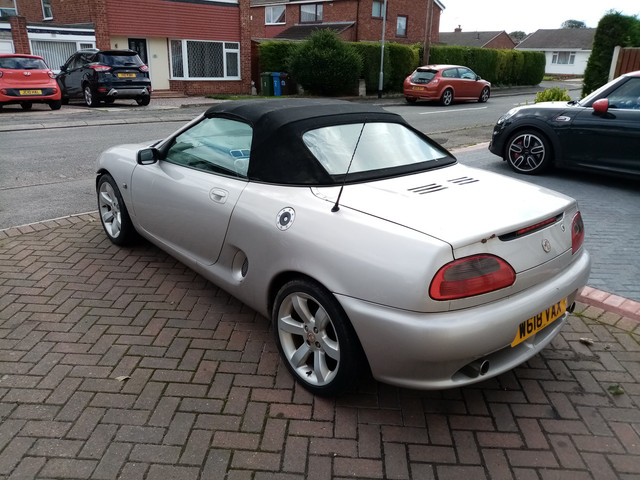 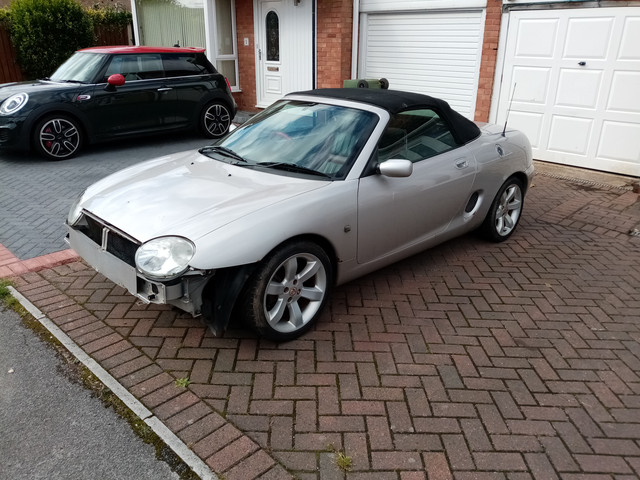 Cheaper to buy a whole car than just a VVC engine, I also get a full rear suspension which I'm hoping to swap over to the new subframe.
Top

So tonight the engine came out, wheeled over to the back of Bumble & then I came up with a cunning plan, do think I can get away with a single radiator? 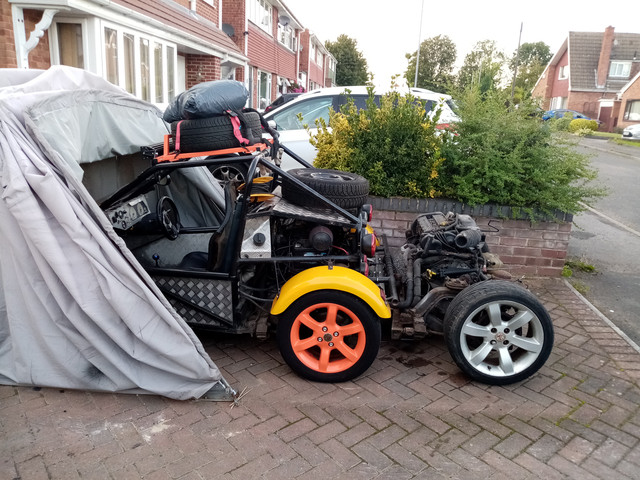 Slowly moving forward, well I say forward, I'm still at that point of going backwards by taking things apart I had 1 piece, which was an engine, gearbox & subframe now I have 3 separate pieces.

I was going to strip the subframe further, but got distracted by the engine, the alternator bracket decided it didn't want to come off so it was persuaded to let go of the alternator. Then moved onto seeing about taking the cambelt off, had to remove the thermostat housing, which appears to have been leaking as it had broken in 2

The water pump looked okay but i's clear they didn't run antifreeze in the engine, I have a new one to fit.

Users browsing this forum: No registered users and 1 guest