Hey there.
Finally getting around to finishing the little freestyle.
Ive had a run up and down the lane and the 1st thing to comment on is which expansion tank to use. The current one obviously needs replacing but on a short 3 minutes up and down i was lucky that the tanks didnt split fully as i had partially.
I dont really wanna spend loads but what tanks are people using.

Second thing is the actual setup. Im sure theres something wrong its but the way it keeps filling up the expansion tank is worrying. 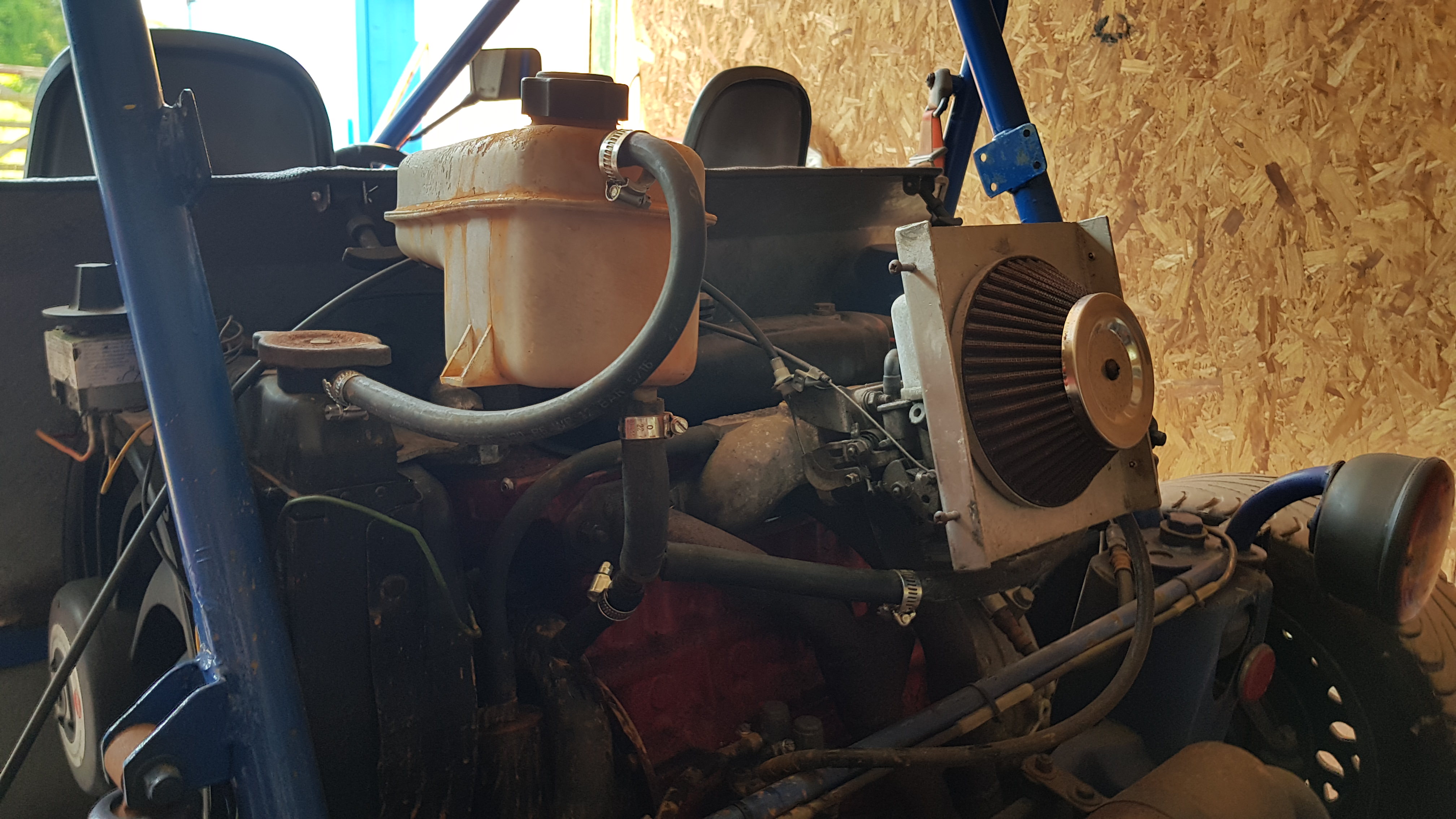 Long time since I had anything to do with A series so relying on memory.

The expansion tank I think is the wrong type, as what happens with an A series is that the water expands past the pressure cap into a container & then as the engine cools the vacuum caused pulls the water back into the radiator, which I don't think it can do with your tank as the pipe is in free air above the water level.

@Max he may know more, he is the font of knowledge on A series although his never runs

I think if you are going to run off the radiator you need a vented container such as this to capture lost water out the overflow. This came from a quad bike.

I believe if you do this then you need to replace the pressurised rad cap with one that isn't.

If you want to run a pressurised system with an expansion tank then you need to plumb it in the system either before or after the water pump. Maybe where the heater matrix comes off? I picked one up for a tenner off a freelander.

I haven't fitted mine yet but I think Danny mentioned he fitted one when he was running an a series. He may be able to help also.
Top

Yeah I fitted one and ran an extra rad as well...
Top

Yeah that seems sort of right but a normal expansion tank is not presurissed is it? And if i keep a presurissed and allow for a void to allow expansion then im not keen on the unit exploding if i have an issue With it being external and in close proximity to my head it feels unsafe.
So i thought to add additional coolant capacity in a presurused sense i really need to add both of what you have recommended.
Ie.
A header tank that is full up with a 2 way pressurised rad style cap with overflow outlet and an unpressurised cap on the rad. Then the overflow would go to a vented half full tank to allow expansion and suck back through the addition header tank.
Does that make sense?

The mini forums arnt much help as they dont have to contend with the risk of an exploding tank close by to your head.
Top

The whole cooling thing on the A series just boggles my mind. I haven't added any cooling upgrades except for a very sexy alloy rad with fan switch, electric fan and an MG midget sucky fan. I wired in an override also to switch the fan. The elec fan has not come on so far, I tested the switch in a pan of boiling water and is all working as confirmed with my multimeter on continuity test.

If you have the standard mini fan swap this for the MG sucky fan and a decent alloy rad. You may find this is enough without an expansion tank or any other upgrades.

I guess it all depends what load you put on the engine, buggy weight, tyres, final drive etc.

Just start with the basics and go from there. Sucky fan is very cheap on ebay.

I will probably put the rad at the front in the nose cone and re-locate the battery at some point.
Top

If I was doing the A series again the thing I would do is take out the mechanical water pump & replace it was an electric one, the biggest time I had issues was after a spirited run, or a blast up the motorway/dual carriageway & then get stuck at the roundabout. I put it down to the fact the pump was just not shifting enough water to keep it cool
Top

Phaeton wrote:If I was doing the A series again the thing I would do is take out the mechanical water pump & replace it was an electric one, the biggest time I had issues was after a spirited run, or a blast up the motorway/dual carriageway & then get stuck at the roundabout. I put it down to the fact the pump was just not shifting enough water to keep it cool

yup...... I often would sit at lights revving to keep the water moving
Top

Well expensive but may well be the best solution.
Top

That is well expensive, the way I was thinking of doing it was to use a standard water pump, try to get one of those with the folded metal blades the ones people say are crap. Grind off the impeller so it doesn't actually work & then fit an external pump. Even on the K series I have an additional water pump out of an Audi TT which continues to pump water after the engine is switched off, but I don't know how much it pumps & whether you could use just that. Also not sure what the pump controller does, the descriptions for the products are shite, how they expect people to pay 350 sods on those descriptions is laughable. But Spiyda used to do a fan controller (but can't see it on their site) which with a set of relay's I'm sure could control a pump
Top

I just put a switch for my extra water pump...
Top

Yes, but this is intended as a replacement not as as well & we know your electrical skills
Top

Yes, but this is intended as a replacement not as as well & we know your electrical skills

I wired up my oil pressure gauge this week

Intetesting comments guys.
Well i have replaced the water pump, thermostat, hoses, head gasket, and now the expansion tank which is an audi one and holds loads more coolant. Its postioned a bit lower than the old one and has the pressure release pointing backwards which is much safer (unless your a cyclist right behind me. Lol)
I have made the bracket such that i can use it to ad other bits in the future like engine cover etc if i need to. I think it looks good and better than what was there.

Now i would like to bin of the rad fan controller thats cumbersome and a bit of a bodge as its just wedged in the end of the top hose. Looking for options to get rid of if. Probably go to a manual switch short term to stick the fan on as soon i get stopped in traffic.

Users browsing this forum: No registered users and 2 guests