Menu
Log in
Register
Install the app
You are using an out of date browser. It may not display this or other websites correctly.
You should upgrade or use an alternative browser.

Could recommend one though, would be no problem if it was at the back of the house but on the drive it was a no no. I've found one like I used to use for Bumble, but annoyingly it's more expensive & I suspect poorer quality

Good effort with that seal Alan. At IVA they spent a lot of time under the buggy on the ramp and any oil leak is a fail.

250buggys":1f1ifejf said:
Good effort with that seal Alan. At IVA they spent a lot of time under the buggy on the ramp and any oil leak is a fail.
Click to expand...

No plate needed for axle weights. When it goes on the weigh bridge they tell you the exact axle weights and check it matches your design weight on the paper work. Worth finding a public weighbridge near you as this would be a fail if the design weight doesn't match the actual weight.

When I had my engine out of the sub frame I replaced all the oil seals, he mentioned it had a weep and I showed him the receipt for the oils seals. It didn't leave any drips on the floor and it has never dripped on my drive. he laughed and said what mini engine doesn't leak. Worth taking a rag and wiping over before hand etc. Pretty sure water leak is a fail too but under pressure you will soon know about that, he said most cars overheat on the rolling road but mine ran fine all morning, it was pretty nippy though!

It is worth getting the design weight as close to the true axle weight as close as you can as it a mathematical function of braking efficiency . I saw him pop off and do the calcs. No point overstating it and giving yourself a tighter margin especially if you have fitted new pads and not bedded them in prior to rolling road test and at the same time understated it on the paper work and get an instant fail.

When I started my next project after the Freestyle I wanted a kit car and not a kit conversion! looks like you wanted a kit conversion. I am sure if you had bought that MX5 donor Zero you told me about you would be happy zipping around in it now but instead you just wanted loads off bits all over your drive and to put them all back together and meet the challenge of the IVA...

The Zero is not quite a Caterham by any means, it has no build manual or build procedure and has many kit conversion elements and probably (certainly) won't have the resale value of a Caterham, but it should go pretty well. Your kit must remind you of the problems you had to overcome with the Freestyle.

Kind of on the same subject, I was up at my local college and they changed their foyer display. Before they had the landing gear from a 747 sitting in the entrance hall, everyone just walked by without a second glance except for me who spent a while trying to figure which hydraulic hoses controlled what. Anyway over lockdown they changed it and put a CBR and a kit car in the lobby. I couldn't work out which kit it was after studying so many 7 designs.

The front cycle wing is exactly what I have (after IVA) in carbon but the thing that really drew my attention was the windscreen bracket combined wing mirror bracket. Looks like cast alloy and is exactly what I need. Just where do I find a pair, that is the question?? 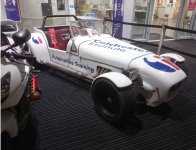 250buggys":31wb5m3i said:
Looks like cast alloy and is exactly what I need. Just where do I find a pair, that is the question??
Click to expand...

Chris, Do you do Faecesbook, chances are somebody on there will know where to get them

Hi Alan I don't have the time for Facebake, not my generation but I may well put a post on the Locost 7 Forum or RHOCAR but not a member, the Zero forum failed from what I understand and people seem to host their own builds. but I guess this is a more 7 related question in general. Do you have an account on either forum? I have a saved search on ebay but nothing has come up and those brackets look as though they should go through IVA so should be quite widely adopted throughout most builds, I cant believe I have not come across them before. I have some stupid F1 carbon mirrors and will probably re think these for IVA! The carbon ones that came supplied with the Freestyle were e marked and went straight through, as long as they hit the angles I guess they are all OK.

Staff member
I'm going through with these 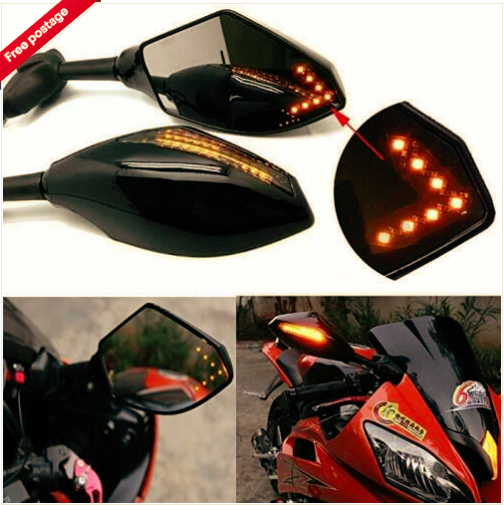 Others have so hopefully they should be okay,

Thanks Alan good work, that makes sense as Dax rush 7s are the only square head lights you see.

Yes certainly is Dax Rush, I found this one which confirms it which is great, just need to be able to purchase some.

Thanks for your help 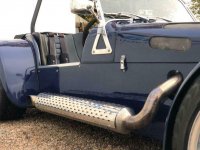 I found this Dax Rush up the road from me, Cosworth engine. V nice.

Hi Alan only a couple of weeks now until the IVA how is your job list comming along?

Will be good to hear your views about the IVA compared to the SVA.

I picked up an LSD for my build. 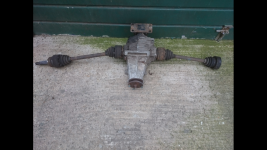 It came with another one that was seized but didn't take long to sort out, had been drained and the moisture in the air had got to it. Probably would have been ok if the breather was taped up with electrical tape.

Are you going o drive it there?

I bought two of these and took the rest with me

Staff member
No I'll be using this 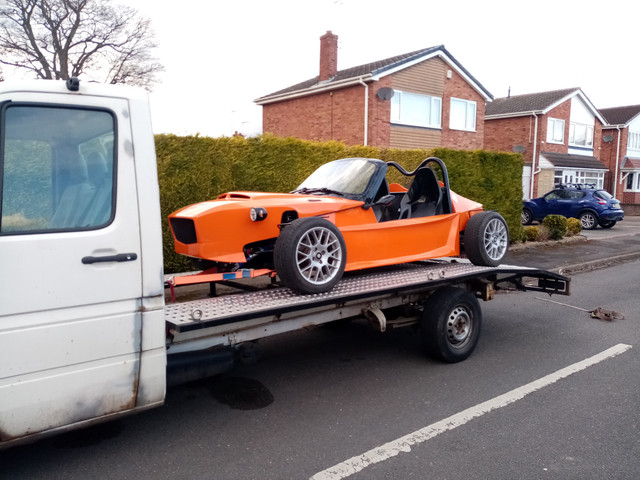 Thanks on the nut covers, they are only about 10 miles from & I want to look at their padded fibreglass seat pads, so may drive over

I have been to their show room to pick up my scuttle and a car load of other bits, about 4 times a year they organise a cars and coffee event, not just Zeros so if you are local might be worth a look.

Hi Alan, can't wait to hear how you got on.

I had the same weather when I took mine, I remember loading the transporter in the dark at 05:30 below zero.

Anyway just a few hours before the test I was cutting into the wiring loom to get it swapped over and get it right!

I was lucky as I got loads of advice from Justin and Alistair as to what to look out for.

You might be surprised and get a pass especially with all the kits you have built in the past. The paperwork is the boring bit!